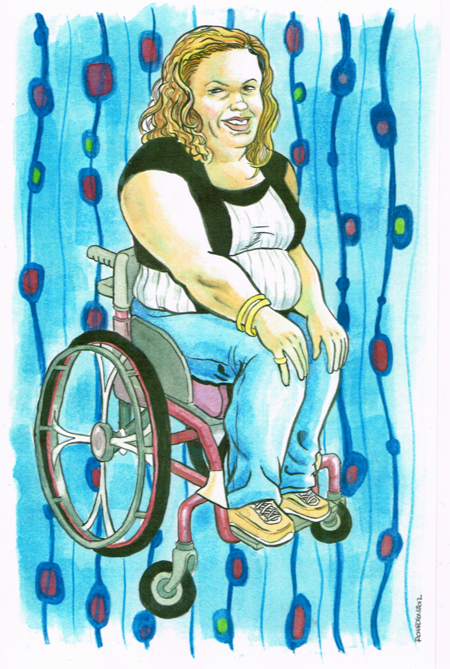 The below painting was posted some months ago. It was an experimentation mixing gouache paints with matte medium (instead of water) that had mixed results. Four of them where done and the below pic is my second least favorite so I had to redeem myself... 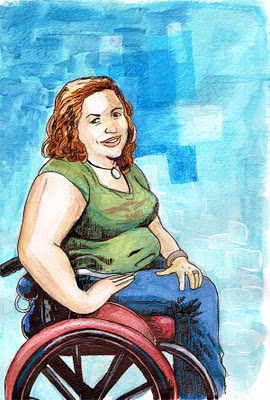 Michelle, who keeps a scrapbooking blog, is a friend who I offered to do a portrait of sometime ago. I offered to draw the portrait a long ago but circumstances at the time prevented me from pursuing it. The intent was to do a life drawing, but we couldn't coordinate so I have to settle for doing the pseudo cartoon illustration version - But hey, I do keep promises even if it's 3 years overdue. BTW, There's another friend of mine who have an obsession with female bodybuilders. I have long given him the illustration of Sarah Dunlap (Which was done in the same style, coincidentally but was way better than the above) I still owe him that illustration for helping me move into my apartment. I did work with a theme of 3 small pieces but they ended up sucking. I'm not giving him that ham-fisted shit - Unless he wants it....But I digress... 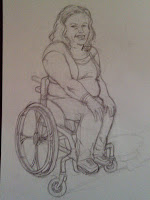 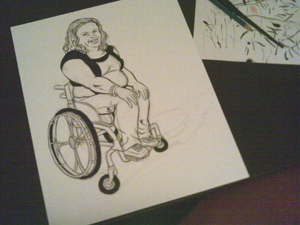 This would be the first illustration I've done where the subject uses a wheelchair. Upon doing additional research - mainly in some wheelchair designs - I was a little surprised to find that they isn't too much around in terms so "wheelchair art." It's a little difficult to reference any material to draw inspiration on. They are plenty of photographs but I couldn't find anything as far as a fine drawing or illustration to draw on to come up with a theme so I had to tweak the original them a bit. 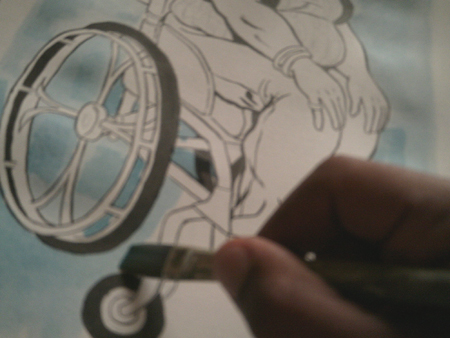 Reluctantly, I built on the same theme as of something of a patchy blue background them at the last minute something hit me.

Labels: Michelle, The Creative Process
Email ThisBlogThis!Share to TwitterShare to FacebookShare to Pinterest